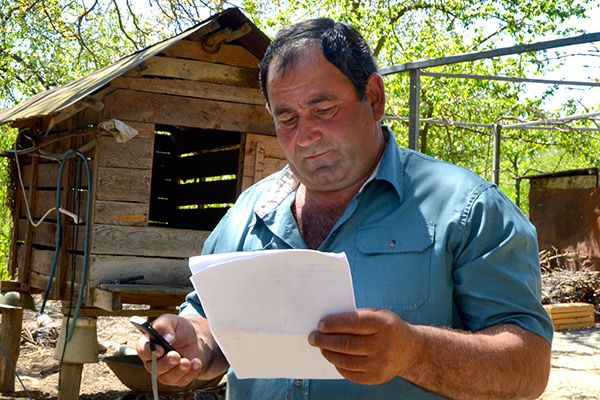 This article appeared in the 3rd issue of 2013 of the Security Community magazine of the Organization for Security and Cooperation in Europe (OSCE). Please see the online article here.

A group of young innovators is using a mobile phone platform to connect remote  communities in northern Georgia with each  other and international security providers.

“A man came to our village to visit his uncle. in the morning he went to buy tobacco, but he never returned.  We suspect he was detained by the russian border  guards,” recounts Giorgi of the northern Georgian village of Dvani. Incidents like this occur regularly in Dvani and  neighboring communities since the August 2008 war.

Although armed hostilities ended five years ago, the communities’ peace is still frequently disrupted by gunfire, and residents often spot armed groups roaming the fields around their homes. Moreover, local residents who knowingly or unknowingly cross the boundary line between their communities and south ossetia to collect firewood, visit relatives or to trade are often detained by the de facto south ossetian authorities.

The European Union Monitoring Mission (EUMM) has  been on the ground since 2008 to monitor the situation  and together with the osce works to address such  incidents through the internationally agreed Incident Prevention and Response Mechanism (IPRM).

But monitors and security providers face one crucial challenge: obtaining timely and detailed information. many of the communities are remote and hard to access. Getting good information on local security needs is time consuming and costly, if not impossible. To resolve this problem, a team of conflict analysts and ITprofessionals, with the support of UNDP Georgia, have implemented a pioneering methodology using a mobile phone platform. Called Elva, Georgian for “lightning”, it allows conflict-affected communities to share brief reports on security needs, trends and incidents with monitors and security providers.

Residents in northern Georgia have used Elva since 2010 to report local security incidents. the process is simple and
works in even very remote communities. Participation is entirely voluntary. Each week, village representatives send answers to a series of core questions to a central phone number by sms. Using Elva’s SMS questionnaire format, which designates a single letter to symbolize each answer, they can respond to up to forty questions within the space of a single text message by making use of pre-defined answer codes.

The sms messages provide information about incidents that have occurred and how they affected the communities. They rate the effectiveness of security providers’ responses and suggest possible solutions to outstanding problems. the few residents with access to a smartphone can use the elva smartphone app to send photos and brief video reports about events in their village.

This community-driven information is automatically presented online on elva’s public website in interactive maps and graphs, so that security providers can easily spot security trends and needs and evaluate the  effectiveness of their actions.

Some incidents require an urgent response. this is why the communities also use elva to request emergency assistance. they mostly use it to report missing persons and – if they prove to be detained – to request their
release. “it used to take days before everyone became aware of detained persons and negotiate their return,” says local resident Nino. “But now we simply send an elva text message and it immediately goes to the police and
international observers.”

To ensure that the network remains a useful source of  information, also in times of relative peace, the project team uses it also to distribute automated local weather forecasts, agricultural news and other announcements. “We had a stroke of bad weather a couple of weeks ago. But farmers in my village had enough time to get ready because I received an early notice about expected frost,” says Zaal, a farmer from Dvani. “There are everyday issues we need to discuss, such as water and irrigation. If South Ossetians could join Elva, it would be much easier to exchange information and find solutions,” he adds.